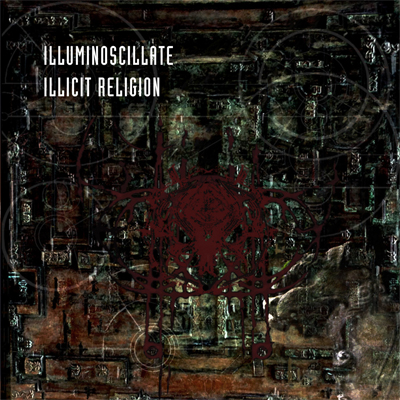 The lives of mortal women and men are awash in sound; sound of presence, found sound, sounds both harsh and subdued, caught in the relentless snare of the material condition: birth, death, ennui and chronic reflection. Sound phenomena present the eternal unconscious with a wealth of new material for the creation of esoteric messages laden with limitless interpretations. Eschewing logic, the constructs of sonic imagery and primeval voices both inform and birth pure experience, wage war within the conscious mind, altering and subverting our a priori abstract moral framework.

Australian dark ambient artist Illuminoscillate’s 2013 release Uniform Wall explored the external human experience. His new album Illicit Religion dares the listener to plunge helplessly into the recesses of the unconscious mind. Melding organic field recordings and synthetic hardware disembodiment with the haunting vocals of the mysterious Japanese performance artist K.Saito, Illicit Religion sees Illuminoscillate digging deeper than ever before into the safely guarded sanctuaries of the unconscious, dismissing the rigor of expectation and sacred rite. What remains is a map of the subliminal ethos that forms our own inscrutable Illicit Religion.

We mentioned the brilliant 2017 short film we worked on a whole bunch here but at the time the only way to see it w… t.co/ZqkjZHWxAt